I just published my second story via Amazon and Kindle Direct Publishing entitled Warp, twisty novella about time travel. I am so excited to share this piece with the world and I hope the world likes it back! It is only a buck on Amazon for Kindle download (you can simply install the Kindle app for free on any device) but I can’t control the price of the novella on Audible. However, I can give away several audio books. To get your free Audible copy of Warp follow the instructions below using on of the 10 promo links provided. This is first come first serve:)

Go to my book’s page on Audible.com: https://www.audible.com/pd/B07GX25B37
2. Add the audiobook to your cart.
3. If you are prompted to sign in, please create a new Audible.com account or log in.
4. Go to https://www.audible.com/at/redeem. Enter the promo code and click “Redeem” to receive a credit for the title in your cart.
5. Head back to your cart. Make sure the button that says “1 Credit” is selected and that your subtotal reads $0.00 dollars.
6. You may proceed through the checkout by clicking “Proceed to Checkout” and “Complete purchase” on the subsequent page.

Oh my goodness I am so excited about this! Recently, I blogged about publishing my short story, The Short Lives of Lobsters through Kindle via Amazon. Well, I decided to create the piece into an animated sort of music video! Perhaps this is the beginning of melding art forms and marketing books with animated shorts! Perhaps this is just how I want to do it but nonetheless the result is beautiful, breathtaking and perfectly represents my tiny post-modern tale about a man who loses his emotions. The animated video is created by Zachary Winterton of ZSW creative and artwork by Chris bigalke of Showdeer  song credit goes to Rare Monk, “Join the Sea” off of their college album Falconer’s Folly.

This is the first Q & A on natflad.com and I am so excited it is with the dope drummer from Portland’s psychedelic indie rock band Rare Monk. These talented fellows have been together since college and continue to evolve and rock on. I met Rick during a trip to Portland a few years ago when their tunes captured my interest and I have been following the crew ever since. Check out their website for music videos and tour dates!

So nice of you to do a Q & A for me. I hope that your fans will like this as much as I do!

Q. When did Rare Monk form?

A. 2008-ish? A couple of the guys had been jamming together since high school and then we all met up at University of Oregon. So many house parties! For those interested in a glimpse of that insanity, search “Lorax CASL Promo” in YouTube and go to the 5 minute mark.

Q. How did the name Rare Monk come to being?

A. The name came from our friend’s drunken misquote of a scene in “Zoolander”. I would give more details, but it really wouldn’t make any more sense.

Q. What are your musical inspirations?

A. Growing up, pretty much anything loud. A lot of At The Drive In, Brand New, Trail Of Dead and a ton of bands I’m too embarrassed to admit to here. In college I was all about the drumming of Stanton Moore (Galactic) and Dave King (The Bad Plus). Nowadays, pretty much any new music I can get my hands on.

Q. At this moment, do you have a favorite song?

A. Currently have Royal Canoe’s “I Am Collapsing So Slowly” on obsessive repeat. Also, “Robot Stop” by King Gizzard and the Lizard Wizard.

Q. What song of Rare Monk’s do you feel most connect to and why?

A. Probably ‘Splice’. I vaguely remember that song just falling into place so naturally when we were writing it. I also think it marked a new level of songwriting for us as a band, like we were finally figuring out our sound in a way. (Watch Splice here: https://www.youtube.com/watch?v=O66H08eIF_I)

Q. How did you establish your fan base?

Q. What was your most memorable performance?

A. In college, we played a show that literally almost brought the house down. We were playing in our buddy’s living room and as the set went on, the floor was moving so much the crowd looked like they were bouncing on a trampoline. After the set someone went into the basement and found out that the floor was basically about to collapse. I’m pretty sure the house was condemned a couple weeks later. Almost so many seriously injured hippies…

A. They’re insanely fun to play; it’s like being able to dance while sitting down. In retrospect, if someone had told me I was going to spend the better part of my 20’s lugging drum gear all over the country, I probably would have chosen differently.

Q. What is the toughest thing about touring and being a musician in general?

A. Waaaaaay too many to list off, so I’ll just say it’s all totally worth it.

Q. How does Rare Monk collaborate to create their songs?

A. Usually someone comes in with a rough idea or even just a riff, and we start jamming on it and trying things out. Once we have a general structure for a song, Dorian (singer and lyrist of the band) will write lyrics for it and we start fine-tuning. Since people rarely come in with all the parts written for a song, everyone usually gets to put their individual stamp on every song.

Q. What is your favorite drink to imbibe?

A. Probably a good Old Fashioned. Or a cheap beer. Alcohol in general.

Q. How is Portland related to your music?

A. I think the Northwestern environment has played a large part in the atmospheric and sometimes dreary undertones in a lot of our songs. Songs to be cooped

Q. What is your favorite movie?

A. “O Brother, Where Art Thou?” is definitely up there on my list. It’s like visual/auditory comfort food.

Q. What is your favorite book?

A. Probably “Imagined Cities” by Italo Calvino. It’s often been my go-to read for touring and recording sessions.

Q. I recently listened to your first album, Astral Travel Battles. I love the song Teak. What is it about?

A. Teak is basically the personification of human beings shitting on the environment and the consequences of pissing Nature off.

Q. What was the greatest reaction to your music?

A. Pretty much any love given to us on the road. It’s always awesome getting support locally too, but a few kind words after you’ve been driving and eating gas station snacks all day definitely goes a long way. Always very humbling when someone digs your music thousands of miles away.

Q. Do you have a new album in the works?

A. We’re currently have a new full-length in the works which we are extremely excited about. Have about 6 songs tracked and working on some brand new ones to add to the mix. Some of our best work to date in my humble and extremely biased opinion.

Q. Rare Monk’s album art is very intriguing. How did you find the artist and how do you feel it relates to your music?

A. We met Chris Bigalke while booking shows in the early days, he worked for a couple of venues in town. We saw some of his stuff online and asked if he could do our album cover, and we’ve been working with him ever since. Super talented guy; we usually just send him the new music and he always cooks up something awesome. I personally have a couple of his other pieces up in my house. Showdeer.com, check his stuff out and support local artists making rad shit!

Q. Anything else you would like to mention to your fans?

This post-modernistic short love story is a devastatingly beautiful snippet of a man who loses his emotions and is left to live his life without what makes us the best of what we are and also the worst. Purchase the entire story on Amazon.com for 99 cents. If you are interested, please email me natfladager@gmail.com and I will send you a free PDF.

Artwork by Chris Bigalke of Showdeer 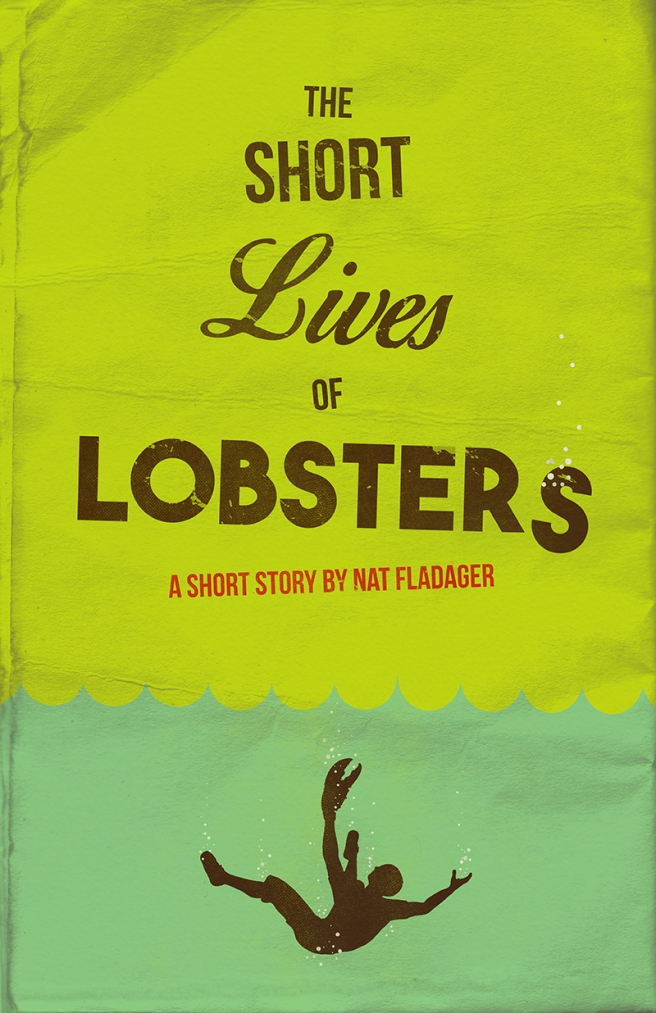 My darling friend Sarah started her dope company, Feedback, while we were working together a few years ago in a job where dreams do not come true. We would plot out our future ambitions and wishes and in no time, Sarah set forth to make hers a reality. With care and finess, as well as love and talent Sarah Marie Peek is giving music and photography something beautiful and reliable to harness, literally. Take a look at his gorgeous piece by Dylan Melcher for Feedback Straps.

5 ⭐️ review of Warp! Such a wonderful feeling that someone read my little self published novella and liked it!! #warp #natfladager #novella #timetravel #review #book #kindledirectpublishing #author #amazon #happy #writer
Grecian goddess
The last few years have been divine and rewarding personally and professionally. I hope to become a better person and writer in 2020 and continue to grow and learn! Two novels in the works!! 🤩📚
Giving away my time travel love story novella for Xmas! Just click link in bio to get it! Give the gift of a great read! 🎄#novella #promo #free #amazon #kindledirectpublishing #writer #books #xmasgift #gift #xmas #natflad #raremonk #showdeer #selfpublished #ya #lovestory #timetravel
Its that time of year! Giving away my sweet novella Warp for FREE from dec 14-18! Simply click the link in bio and amazon will send you or anyone you choose the ebook for free! Give the gift of a good read this year no waste paper free and thoughtful! 🤩☃️📖 #free #bookpromo #xmas #christmasgifts #ebook #present #stockingstuffers #virtualstockingstuffer #natflad #warp #fiction #ya #romance #timetravel #showdeer #perfect
My absolute favorite band and music I often write to had such a stellar year! oh I also have a q&a on my blog interviewing the drummer rick! Nat flad.com @raremonk 🤩#writingsongs #inspiration #music #indie #pdx #natflad